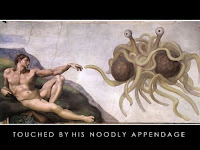 My Aussie Heretic ears started burning when I heard this news from Australia. Burning is not generally a comfortable sensation for a self confessed heretic, but this was good news. A Humanist Society is close to being approved for an atheistic curriculum for primary (elementary) school children. Parents will have the option to send their kids to a class where they will be taught that the evidence for the existence of God is as flimsy as the evidence for the existence of the Flying Spaghetti Monster or the Invisible Pink Unicorn. This is good news for diversity, and free thinking.

Mind you, I wouldn’t send my own Aussie Heretic protégés to that class. I would be very glad for them to be educated in an environment that includes such a broad range of perspectives. But I wouldn’t send them to the class. I would send them to a class that teaches the facts and spirit of many of the world religions. Then they could make their own informed decisions about what makes sense to them.

I’m comfortable telling my kids that there is no evidence for the existence of God. There really isn’t any evidence. But there is plenty of evidence that the myth around God, and God language, is purposeful. I want them to understand that as well. And they CAN understand that, at the right age.

American author, Ann Lamott, tells the story of the time her 8 year old son, Sam, said to her, "I think the reason they call God 'God' is because when you see something really, really beautiful, you go, 'God, that’s beautiful!'" As Ann said, "OK, that works for me." It works for religious education too.

It’s so natural to use God language to capture even a hint of the wonder of life. We describe a sunset as ‘heavenly’ or a dessert as ‘divine’. We describe best friends as ‘soul mates’. We shout the name of the almighty during our seven (sorry eight) minutes of horizontal hokey pokey and know we are neither addressing our partner nor any deity in particular. We grasp at language to hint at experiences of wonder, and draw on myth that fills ordinary moments with extraordinary meaning. The myth of incarnation is God becoming human, the ordinary becoming extraordinary, the natural becoming miraculous.

What do you think? Should schools in America include some sort of broad, non dogmatic, world religion’s class? Should schools in Australia embrace the inclusion of humanistic curriculum? Should we be offering spiritual atheism to kids who have come of age, no longer need a magical, theistic God and are looking for the power of myth to describe life?
Posted by Ian Lawton at 10:19 AM

I'd like Americans to be more educated about religion and atheism, but I have zero confidence that teachers in grade schools could teach an objective course. I'd be concerned that it would become an opportunity for evangelism.

I think the best answer is to keep religion out of public schools.

Religion plays a very important role in our society and I think that kids should be educated about it. I do not approve a course that says that God does not exist (even if I think he does not) because what exactly is that course teaching kids? I think that every school should have a course called something like Religious Studies where they will cover the aspects of all major religions. Kids should be taught to respect other people's beliefs even if they are different from theirs. They should learn to be tolerant of other people's religious traditions. May be then we will have less wars and people fighting over who's God is better.

Your quote "Why ruin a good party?" is perfect -- loved it.

Love these kinds of discussions. Thanks for giving us the opportunity to do so.

However, what if a course were taught on the basis of the question, "What if god does not exist?"

The purpose of true education (rather than indoctrination) is to teach people to think, to examine assumptions, to reason conceptually, and development sound ideas and conclusions.

I object to your demand that every school should "teach" religious studies, unless you equally include non-theist "religions" and atheism. Oh, wait, that's called philosophy.

I am reminded of the vicious uproar that ensued when a local (southern U.S.) secular university put a book examining Islam on the required summer reading list a couple years after 9/11. "How dare you force us to be exposed to those ideas." The university stood its ground.

Finally, I agree with your statement about teaching tolerance, but you seem a bit shy on tolerating atheism. You should know that, as an atheist, I am disgusted at those among my fellow atheists who cannot tolerate another's religious beliefs. There are zealots everywhere. I can either tolerate (read "ignore") them, until they start denying rights to and harming people for their dissenting opinions.

Its a matter of choice.

But here's a deeper heresy. I think compulsory mass education is harmful for kids. I think that forcing kids to attend school, sit in quiet rows, be good, and learn about ... wait for it ... freedom , is sort of creepy and Orwellian. That's part of why I homeschool my kids.

My daughter was baptized at age 8. Now this is the UCC -- no creed or catechism to memorize -- but during the service the pastor asked her one question: "Do you believe in God?" She replied, right there in front of God and everybody, "I'm not sure...it's sort of a mystery, isn't it?" Thus, the homeschooled child. I was so proud of her! When I was her age, I was already expert at figuring out what people wanted me to say, and saying it.

So I agree with Mike L.: "keep religion out of public schools." But I'd go even further: if you can arrange it at all, keep your kids out too!

I like the post.Spiritual living can help counter our stresses. Living on a spiritual edge enables us to be embrace life, family, friends, and oneself. To learn about spiritual living, there are spiritual living courses that can give you practical tools and techniques to unlock your deepest potential and bring fullness to life. Whether your current state is happy or sad, spiritual living gives you effective techniques for releasing mental and physical stress along with increasing your health, energy, peace, self-knowledge, awareness, and joy.